I sat next to my husband as I stared out the window of the ICU on the third floor at Creighton University Medical Center in Omaha, Nebraska. I listened as the machines breathed for him and closely monitored his heart. He had made it through one surgery, but many more were to come. His abdomen lay open with only a clear plastic covering over it; I was told this was necessary to continue draining his body of the toxins leaking from his fractured pancreas and to allow surgeons “easy access” should my husband code. 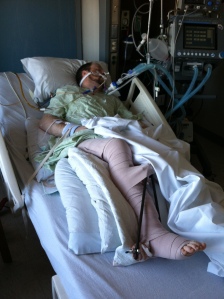 I asked the same question over and over. “Is he going to live through this?” Nobody would give any answer other than, “We are going to do everything we can.” They gently handed the papers to me to sign; I knew Jeremy would want to donate his organs if anything could be saved. I signed them wondering if Hudson, age 5, and Asher, age 2, would remember their daddy. That’s the hardest memory, the one that makes me look like this today, January 16, 2016, as I write this post for you. I believe in honesty, I believe in being open with our story for the world to hear, but it’s never easy to relive all the details.

It was February 16, 2012, when I got the call that Jeremy had been in a car accident. We had no idea how bad it was at that time. Jeremy was life-flighted from Cozad, Nebraska to Kearney, Nebraska and then on again to Omaha when doctors discovered the severity of his internal injuries.

Truth be told, I immediately began questioning if Jeremy had done it, if he had succeeded in a suicide attempt.

After being diagnosed with depression in 2009, Jeremy’s mental health continued to deteriorate. To this day, Jeremy has survived five suicide attempts and the near-death car accident in 2012 directly after he began a new depression medication that caused him to black out at the wheel. He went straight into a semi-truck at 60 miles per hour. Yes, I said near-death. Jeremy survived. I’ll never forget his surgeon coming to me after the last surgery; he looked me in the eyes and said, “Aren’t you going to ask me the question?”

I couldn’t breathe anymore. Through gasps and uncontrollable tears, I managed to say, “Is he going to live?” one last time. Dr. Forse smiled and winked. “Yes.” 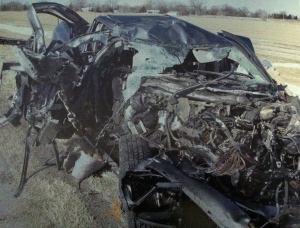 Jeremy’s truck after the accident in 2012.

At this point, you are likely wondering what this post has to do with the myth that is Valentine’s Day. You may or may not have noticed the date of Jeremy’s accident, February 16, 2012 – two days after Valentine’s Day.

As I sat in the ICU listening to the machines keep my husband alive, I stared at the last picture of Jeremy and I on my phone.

It was Valentine’s Day, and it was a reason to tell each other we still love each other, to have a glass of wine together, and to actually get a babysitter and go out for an hour-long meal…just us, just to talk, just to have an excuse to be husband and wife without other distractions. Why? Because it was Valentine’s Day. Isn’t that what we are supposed to do one time a year?

I can’t tell you how disgusted I was staring at this picture as I sat next to my husband while he fought for his life. I remembered taking it over and over because I wanted my nails to look nice. I remembered Jeremy politely going along with my orders as I struggled to get it just right. I wanted the perfect picture to put on social media. My focus wasn’t on enjoying time with my husband, it wasn’t on truly showing him how much he means to me, it was on the world and how they believed our relationship should be.

I listened to the beeps and swooshes as they mocked me. I had become that wife. I had allowed life’s distractions to come before my marriage. I had used Valentine’s Day, one day a year, to make a big deal about my marriage. And even then, I failed miserably. I still didn’t focus on Jeremy, I focused on the fact that it was Valentine’s Day and society told me I was supposed to act a certain way, do a certain thing, and say certain words.

And two days later, two days after I behaved as Valentine’s Day told me I should, I was about to be a widow. This man. This man who had changed everything about me, loved every part of me, even and especially the parts of me I hated, was fighting for his life. Not only that, he fought every single day before this. I just refused to see it. I refused to see the callus, landscaper hands that worked so hard to plant trees and provide for our family. I refused to see the gentle man he became when he sat next to our boys and said bedtime prayers or held a beautiful baby boy in his arms, one he created with me. I refused to put him first, before our children, before our other family members, before our friends. I refused to show him every single day how much he means to me, that my world would stop turning without him. I refused. I had a choice, and I didn’t do it.

But what hurt the most is the fact that I refused to see how hard he fought his depression. Every day, no matter what, he tried with everything he had to get up when his brain told him to stay in bed. He fought his dark thoughts as best he could and chose to believe there had to be some reason, something good about living with depression and suicidal thoughts. There had to be a reason God continued to keep him here on this earth. Every day he fought his brain to still be here and be the man he knew we needed him to be. I realized I’ve never met anyone stronger, anyone with more love or passion in his heart. And I made a big deal over him on one day of the year.

My thoughts overtook me as my sight shifted from staring out the window to the beeping machines and back to my husband.

I believe Valentine’s Day is a myth. Don’t get me wrong, it’s not a bad thing to have a day when you celebrate how much you love someone, but to only do it because society tells you to, that’s where the myth comes in. I learned a lesson I was not ready for, I did not want, but I desperately needed. I learned to love my husband. It took me nearly losing him many times to understand, and I pray you will learn from my mistakes. Love each other every day. Take time together. Put your marriage before your children; trust me, it’s the best gift you can give to your children. They will grow to understand love and to know how to love their spouse. Pray together. It is true that we never know when the last “See you later.” on this Earth will be.

After Jeremy survived five suicide attempts and the accident, we learned we had work to do. We learned the world needed to hear our story. Many need to understand there is hope even in mental illness. Our mission is to provide hope for mental health anchored in Jesus’ promise of eternal life. We will spend our lives thanking God for allowing us the chance to continue being a family. Jeremy continues to fight his depression daily, but we have learned how to take what Satan meant for evil and use it for God’s good. Read our story in “Never Alone: A Husband and Wife’s Journey with Depression and Faith” by Jeremy and Bailey Koch. Follow us by liking Jeremy and Bailey Koch on Facebook. We share our life because we live a reality so similar to so many. We have found hope and healing, and we pray the same for you. We have learned to live, not just stay alive.